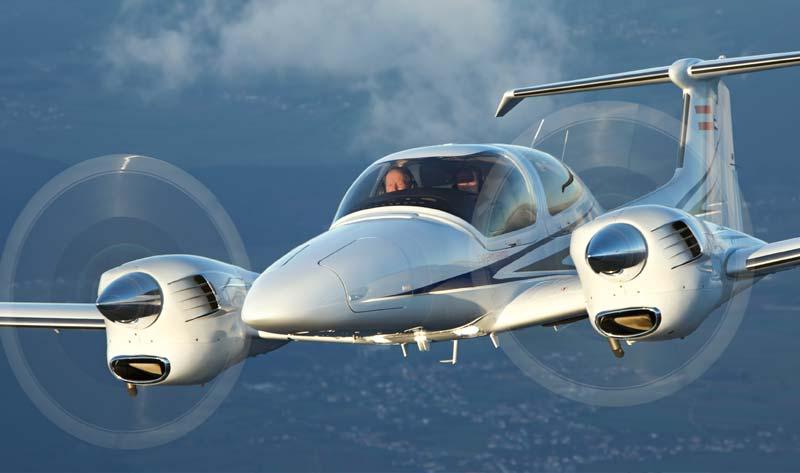 The Diamond DA42 Twin Star is a four seat, twin engine, propeller-driven airplane developed and manufactured by Austrian company Diamond Aircraft Industries. It was Diamond’s first twin engine design, as well as the first new European twin-engine aircraft in its category to be developed in over 25 years. In 2004, the DA42 became the first diesel-powered fixed-wing aircraft to perform a non-stop crossing of the North Atlantic. Government customers have typically employed the type in the aerial surveillance role, which contributed towards the development of the Aeronautics Defense Dominator, a medium-altitude long-endurance (MALE) unmanned aerial vehicle (UAV), which had been derived from the DA42.

The Diamond DA42 Twin Star is twin-engined low-wing cantilever monoplane, commonly used as a general aviation aircraft for touring and training purposes. It is equipped with a retractable tricycle landing gear arrangement and uses a T-tail.The airframe is composed of composite materials, making extensive use of carbon fiber reinforced polymers throughout its structure;The carbon-fiber main wing spars possesses exceptional crashworthiness.The DA42 typically accommodates four people, these being a pair of pilots sat in side-by-side seating along with two passengers seated behind each of the pilots.All of the seats have been designed for crashworthiness and are complete with automotive-style three-point seat belts; while the seats themselves are fixed in position, the position of the rudder-pedals is adjustable.